My dad was what we used to call a stinker – a rascally kid and well, honestly, a troublemaker. Somehow back in the day, those random things he did to keep the local police department hopping were fairly innocent and not mean-spirited, but still, I’m sure his scrappy personality was the source of great consternation to both his parents and local law enforcement. It makes me laugh when I try to reconcile that kid that I came to know through colorful stories told around the dinner table, with the acclaimed vascular surgeon he was to later become.

My father was a pioneering researcher in the field of vascular diagnostics, and an avid tennis player up until his body would no longer allow it. But neither of these things were on his agenda back in his youth. Athletics were always a big part of my dad’s life (and probably kept him out of even more trouble!). As a very young man he placed first in the Northwest YMCA Tumbling Championships, and his first varsity letter in high school was for tennis – something he admitted to not being very proud of at the time. His real love was football, and when he started college, he was a talented and dedicated player with firm plans to become a coach.

Somehow in college, he suddenly knew he wanted to become a doctor and establish a career in family practice medicine, and he pursued that path with dogged determination, coupled with an almost crippling lack of academic confidence. He was required to take Freshman English, which he loathed, and he barely squeaked by with a C-. “I had to write some reports in ‘proper English,’ which I had a great deal of trouble with and would have for a long time,” he later wrote. “In fact, even today I know nothing about sentence structure or how one can best put their ideas on paper. This is very ironic since today, I have the reputation of writing quite well and expressing myself in very clear terms. “ He ultimately wrote over 400 papers, over 175 book chapters and 14 books.

So my dad wanted to be a coach, but he became a doctor. He wanted to go into family practice, but became a passionate researcher and surgeon in the field of vascular medicine. He was an avid football player and fan, but tennis became his lifelong joy. Certainly football is a sport with a rather short shelf life, but he came to embrace tennis with a fervor and intensity that was the perfect counterbalance to his demanding career. He never failed to make time to hit with my brother and me through our growing up years, shuttling us to tournaments because my sweet mom couldn’t bear to watch the matches (and the poor woman took us four kids everywhere else!). He rarely missed his weekly hitting sessions with John, a man who became a dear and trusted friend and a very worthy opponent. When we got older and went off to college, we looked forward to returning for breaks when we would hit the courts with dad and John for some spirited doubles. 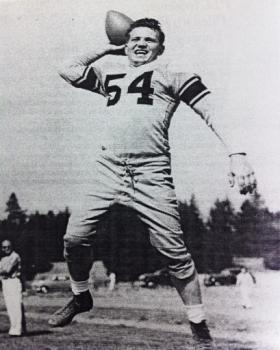 My dad taught me to be tough. I liked the fact that he never held back with me on the court. When I would be at the net taking volleys, he would smack the ball so hard I thought my wrist would break, but I never let him see me waver. He wasn’t being mean – he knew I could do it. He made me know I could do it, and I wanted to be just as tough as my brother.

There is a certain smell of a tennis court on a hot day. There is a certain echo of a ball being whacked across the net that takes me back to those sunny, summer days when my biggest worry was who I would draw in the first round of a tournament. And there is always the memory of my dad and his childlike enthusiasm for grabbing his racket and getting down to business.

When my dad got sick, I think his first question was whether he would still be able to play tennis. The idiopathic lung disease that struck him was brutal at first, and then miraculously there was a reprieve for about five years where he was able to function to a fairly normal degree. Still, we knew that the writing was on the wall, and when the second decline began, he marked his progress by whether or not he could hold his own on the court. I will always treasure the fact that it was me he asked to accompany him to the park one overcast day, to see if he could still do it; to see if he could still hit that fuzzy yellow ball. Fittingly, there was no one else around. This was our moment, and no one else could have anticipated the reverence it deserved. I knew how much it meant to him, and I hoped and prayed that he would have the strength and stamina to hit at least one last time. I’ll never forget his joy when we got into a rhythm of hitting that ball back and forth. Just a sport. Just a moment with his daughter. Just the ability to move his body on that court. I don’t ever want to take these things for granted.

So, in your life, never say never. Be open to where the world leads you. Find your passion, and share it with people you love. Feel the pleasure of moving your body and getting your blood pumping, and revel afterwards in what you have accomplished. Take the time to balance your work with play. It may just be that these simple pleasures are the things that mean most after all.